The State of the State

State Government day started as a typical tourist tour of the capital building, the Governor’s conference room, and a tour of the state museum and the lawn.  We learned that the state government acts a lot like the federal government; you have congressman, senators, lobbyists, and judges.  In my opinion, the Secretary of the State of Arizona stole the show.

The State budget has a lot to do with everything, especially with some of our previous class days, such as Education day and Arts day where speakers were asking for more public funding to promote their causes.  In fact before anyone with fiscal sense buys something of significance, one would check their checking balance before doing so.  With that philosophy one would argue that the state budget presentation should be at the beginning of our class semester and not towards the end.

Two things that I got from the presentation is that no one realizes how expensive K-12 public education and health & welfare is and if the state budget was an actual company, our performance since 2007 would reflect a company that was going bankrupt.  I found a link on the web to Mr. Bennett’s presentation http://vimeo.com/35756903.

Bennett taped pieces of paper on the wall showing the state’s revenues and spending patterns since 2007, when revenues and expenses were about equal at $9.6 billion.

As the sour economy rolled through the state into 2008, Bennett said that was when spending began outpacing revenues. In 2008, lawmakers projected state revenues at $10.1 billion and set spending at $10.6 billion. But 2008 revenues continued to slide, coming in around $8.8 billion.

Bennett said lawmakers began looking for ways to make up the deficit by taking steps like tapping the state’s rainy day account that had about $700 million, postponing more than $300 million in payments to K-12 school spending and making $100 million in cuts.

Bennett showed how the state is spending about $11.1 billion this year while lawmakers expect revenues to fall about $3 billion short.

One alarming fact is how the federal stimulus money must be spent instead of paying off deficits or else that money would be taken away.  So to sum it up, the state provides money to Washington, Washington gives us some of it back and tells us that we must spend it and not pay off our debt or else they will take our money back.

Fortunately, Bennett illustrated how reducing spending actually helped bring our lone profit year of recent history in 2012; I believe this is a viable solution to our situation. 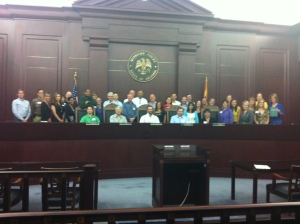 Last, but not least, we visited the AZ Supreme Court and had a Q&A session with one of our Supreme Court Judges, Ann A. Scott Timmer, an enlightening and rare opportunity.  We finished off with a presentation of the state boards and committees that exist; there seems to be a board for everything nowadays.

So what do you think about the State of the State?

One response to “The State of the State”